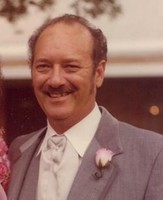 JOE FRANKLIN BURNS Joe Franklin Burns was born in Hope, Arkansas on January 26, 1933 to Elisha Franklin Burns and Desi Clark Burns. Joe passed away in a Dallas hospital on August 22, 2015. Joe was raised in Hope and moved to Dallas in 1955. He worked for Whites Broiler Metal for five years and then started working for Trinity Industries where he was a crane operator and yard supervisor for twenty years. Joe was a member of the Landmark Church of Christ in Kaufman. He loved fishing and gardening. On September 3, 1981 Joe married Frances Bolton in Dallas, Texas. He is survived by his wife: Frances of Terrell, sons: Dennis Burns and his wife Cathy of Allen and Ricky Burns and his wife Lisa of Forney, stepsons: Bob Burson and his wife Julie of Austin and Scott Burson and his wife Ray of Garland, stepdaughters: Janeene Jennings-Leifheit and her husband Daryl of Lexington, Kentucky, brother: Jimmy Burns of Texarkana, Arkansas, grandchildren: Angela Burns, Lindsay Coffey, Mandy Burns and Cody Burns, great-grandson: Easton Coffey and many other relatives and friends.
To order memorial trees or send flowers to the family in memory of Joe Franklin Burns, please visit our flower store.