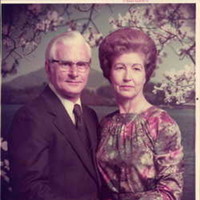 DOROTY MAE DAUGHERTY Dorothy Mae Daugherty was born in Kaufman, Texas on January 12, 1930 to Ben Bardin and Essie Mae Mayfield. Dorothy passed away at Christian Care Home Health Care Center in Mesquite, Texas on September 16, 2015. Dorothy was raised in Kaufman and later moved to Dallas, Texas when she married Luchin Markies Daugherty on January 19, 1946 in Kaufman. Dorothy worked for Sears for forty-four years in the catalogue department. When she retired, her and her husband moved to Cedarvale where they raised cattle. For the last ten years Dorothy lived in McKinney, Texas where she owned an antique business on the square in McKinney. Dorothy was a member of the Church of Christ. She was preceded in death by her husband Luchin on March 17, 2015. Dorothy is survived by her daughter: Glinda Digiacinto and her husband Bruce of McKinney, Texas and a grandson: Darren Digiacinto and his wife Corey of Spokane, Washington.
To order memorial trees or send flowers to the family in memory of Dorothy Mae Daugherty, please visit our flower store.