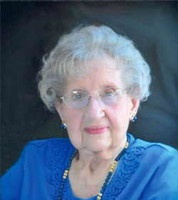 PAULINE HOLDER Pauline Holder was born in Morris County, Texas on February 3, 1922 to William Clea Thomas and Dewey Sterrett. Pauline passed away at her home in Granbury, Texas on October 10, 2015. Pauline was raised in Hugh Springs, Texas where she graduated in 1938. She moved to Mount Vernon in 1940. During the war Pauline went to work for Consolidated Steel and later with Lone Star Steel after the war. She later moved to Athens, Texas and then to Kaufman, Texas in 1947 and then to Granbury in 2008. She married Ray Holder in Hope, Arkansas on January 8, 1940. Pauline was a member of the First Baptist Church of Kaufman and loved gardening, quilting and traveling. She was preceded in death by her husband Ray on June 24, 1979. Pauline is survived by her daughters: Kathy Caldwell and her husband Freddie of Terrell and Paula Holder of Granbury, grandsons: David Caldwell and Craig Caldwell and Priscilla Rand, great-granddaughter: Presley Caldwell and many other relatives and friends. Family requests memorials be to Community Hospice of Texas, 6100 Western Place, Ste 105, Fort Worth, Texas 76107
To order memorial trees or send flowers to the family in memory of Pauline Holder, please visit our flower store.