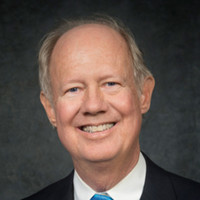 David Bond Baxter, age 65, of Highland Park, Texas passed from this life to the next on Thursday October 22,2015 after surviving colon cancer for over six years. David was born at Baylor Hospital on February 8, 1950 to Turner Butler and Pauline Bond Baxter and grew up in University Park. He graduated from Highland Park High School in 1968, SMU in 1972 and SMU Law School in 1975. David attended UP Elementary as a child, and became a boy scout in Troop 70. David made many friends through scouting and achieved his Eagle rank in 1965. When it was nearly time for his son James to start cub scouts, the pack at Armstrong Elementary had become inactive and nearly lost its charter. David resurrected the pack single-handedly as Cubmaster and established a thriving traditional cub scouting program at the school for five years. Afterward, he returned to his post in Troop 70 as an Assistant Scoutmaster, earning his wood badge and giving back more to scouting than it gave to him, according to the Eagle pledge. His two sons and nephew became Eagles in the same troop. He attended a number of jamborees, from the Idaho World Jamboree in 1967 to the Irish National Jamboree in 2008. Baxter was an avid golfer, competing on the golf team of Highland Park High School and continuing to play at the Dallas Country Club until a few months before his death. He pursued golf tourism, playing at famous courses including Pebble Beach and St Andrews, and in many countries. He was a lifelong member of Highland Park United Methodist Church. In 1978-79, David was elected President of the Becomers Sunday School Class, a large singles class that grew rapidly during his tenure. After his term, he met his future wife, Bobbie Stark during a Monday night meeting called "Share Group." She had just moved to Dallas from New York, to train in internal medicine at Parkland Hospital.They married in Garden City, New York on July 4, 1981, a day that produced 5 inches of rain in both New York and Dallas. In 1983, David helped Bobbie found the Agape Clinic of Grace United Methodist Church. Over 32 years, he continued to enable and support the mission, serving on its Board as President and other posts, and taking over the care of their 3 children every Saturday morning to free Bobbie to volunteer. His other passion was Vision Africa. David impulsively jumped on a plane to Nigeria one week after he saw the need, to assist his friend Rev. Sunday Onuoha (now a bishop) with the founding of Vision Africa Radio. He served as a leader of Vision Africa for years, including serving on its board and providing office space for operations. Vision Africa Radio now brings community programming and Christian content to 20 million Nigerians and malaria education provided by Vision Africa Radio saves lives.David worked as a title attorney in Plano, Dallas and Preston Center and enjoyed sending weekly inspirational emails called "Monday Motivational Messages" and "A Moment to Live For" for years. He delighted in helping parties come to consensus to close their real estate transactions and was absolutely unflappable in the face of intense emotions. Few people have ever seen him angry. In his professional work as in everything he did, David's integrity and humor attracted people to him and made their days and lives better. During his recurring struggle with cancer for the past six years, David remained optimistic and determined until the end. He complained little about his considerable discomforts and disabilities. He bounced back again and again, went to work when others would stay home, and smiled when others would groan. His doctor thought of him as a friend and said "He made it (the doctor's job) easy." That was his motto at work as well-to make closings easy for his customers. He was an easy son to raise, an easy husband to be married to, and an easy father to love. Thank you, David, for making the path for others easy. David is survived by his wife, Barbara Stark Baxter, MD , his mother Pauline Bond Baxter of Kaufman Texas, three children: Richard Turner Baxter, DMD and wife Tara Richardson Baxter, ACNP of Birmingham AL, Sarah Grace Baxter of Dallas TX, James Calvert Baxter and wife Samantha Cloud Baxter of Dallas TX, his nephew Christopher Ryan Pace and wife Amy Lynn Pace of Rockwall, TX and his niece Amy Taylor Pace of Brooklyn, NY. He also is survived by 3 grandchildren, Noelle Grace and Hannah Lynn Baxter of Birmingham AL, and Keith David Baxter of Dallas TX. He was predeceased by his father Turner Butler Baxter and his sister Paula Baxter Pace. Visitation will be Grace United Methodist Church from 6-8 PM Thursday, October 29,2015, and from 9-10 AM at Parker Ashworth Funeral Home on Friday October 30, 2015, followed by a graveside service at the Kaufman Cemetery at 11:30 A.M. on Friday October 30,2015. The Celebration of Life Service will be at Highland Park United Methodist Church at 3 PM on October 30,2015. In lieu of flowers, please send donations to Vision Africa (VisionAfrica.org) or the Agape Clinic (TheAgapeClinic.org).
To order memorial trees or send flowers to the family in memory of David Bond Baxter, please visit our flower store.