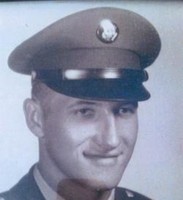 Lester Harvey Fields went to be with our Lord and Savior on November 14, 2015; he is survived by his mother and stepfather Ann & Keith Ramp, three sisters Judy, Leslie, and Carolyn, three daughters Regina, Tina, Deborah and son Israel, ten grandchildren Tiffany, David Jr., Ashley, Bianca, Stevan, Ramsey, Alicia, Summer, Kiara, and Oscar Jr., and nine great grandchildren Aalyiah, Miguel, Stevan Jr, Natalie, Abigail, Issaiah, Nathen, Nain, Ramey Jr and two on the way. Lester served in the 101st airborne division during Vietnam as a paratrooper and was proud to be called a veteran. He favorite hat was his berate he obtain while serving his country. Some of his happiest moments were riding his motorcycle feeling the wind in his hair as well as enjoying times he spent with his family. Lester's mother was his life and he would always call her on Sundays and cherish the moments he got to spend with her. The time he spent with his children camping, fishing, and occasionally taking his daughters on rides without mother knowing was one of his true joys. He enjoyed fishing with his dad to see who would catch the big fish as well as tinkering with his motorcycle at any time. Lester loved traveling all over the states on his motorcycle enjoying the scenery and meeting people from near and far; he never met a stranger. Lester enjoyed watching western movies but John Wayne was by far his favorite actor. His favorite music was old time rock and roll and whenever he heard a song a smile shown upon his face. Lester never wanted for anything because he lived a very happy and simple life.
To order memorial trees or send flowers to the family in memory of Lester Harvey Fields, please visit our flower store.