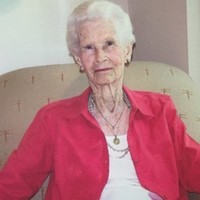 Mildred Allene Bailey was born in Kaufman, Texas on October 14, 1918 to Claud Birdsong and Josephine Garlitz. Mildred passed away in Fort Worth, Texas on January 28, 2016. Mildred was raised in the Jiba Community and graduated from Kaufman High School in 1936. She moved to Dallas, Texas in 1937 and later moved back to Kaufman in 1949, where she lived till 2010 when she moved to Fort Worth. On May 6, 1944 Mildred married G. M. “Shuck” Bailey and he preceded her in death on March 31, 1990. Mildred is survived by her son: Les A. Bailey and his wife Sue of Fort Worth, grandchildren: Casey Olson and her husband David, Brittany Cooper and her husband Dusty, Lindsey Van Newkirk and her husband Jake and Megan Collins and her husband Matt, great-grandchildren: Ole Olson, Bailey Cooper, Cloe Olson, Caden Van Newkirk, Harper Van Newkirk, James Collins and Luke Collins and many other relatives and friends.

To order memorial trees or send flowers to the family in memory of Mildred Allene Bailey, please visit our flower store.