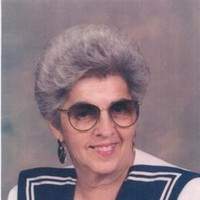 The Kingdom of Heaven is rejoicing at the arrival of an angel, Angeline (Cordovani) Sloan West. Angie, 83, passed away peacefully at her home on March 21, 2016.  She was born to Andrew and Amelia (DiPasquale) Cordovani on April 21, 1932 in Waterloo, NY.

Angie was born and raised in Waterloo, NY and made her way to Scurry, TX in January, 1954, where she and her husband began their family and their lifelong occupation of owning and operating Sloan’s Super Save, which was so successful they built a new store in February 1968 and is still in operation today. She was an extremely talented cook, known for her Italian cuisine such as raviolis, stuffed shells and spaghetti, as well as her pies and cakes that often sold for over a thousand dollars at benefits. She was also an accomplished seamstress and could sew anything you could dream of and also enjoyed crocheting, which she gladly shared her beautiful projects with family and friends. Angie never met a stranger and was willing to help anyone, with anything at any time.  She was a true servant and this was apparent in her devotion to her Catholic faith and was a member of St. Ann Catholic Church since her arrival in 1954.  Angie worked at the Tea Room in Especially For You for many years, with owner Nancy Murphy and enjoyed it immensely.  She was an integral part of many organizations over the years, including being appointed as an honorary Future Farmer of America, serving on the Women’s Auxiliary of the Scurry Volunteer Fire Department many years ago, member of the Scurry-Rosser Parents and friends, a member of the Cottonwood Civic Ladies Club, a board member for the Gastonia-Scurry Water Supply Corporation and many more, but her greatest achievement was her family.  However, you can’t describe Angie’s family and not include the many people that she encountered over the years as customers, friends and school children…they were all family to her.  She supported all things “Wildcat” and the entire community was truly her family.  Affectionately known as “Nana” by everyone, she was the definition of a lady and friend, her compassionate nature and caring soul was felt by everyone that ever met her.

Preceding her in death are her parents Andy and Amelia Cordovani; brothers: Al Cordovani and Johnny Cordovani; husbands Calvin Sloan and James West.

In lieu of flowers, donations may be made in her honor to: St. Jude’s Children’s Hospital or Shriners Hospitals for Children.

To order memorial trees or send flowers to the family in memory of Angie A. West, please visit our flower store.