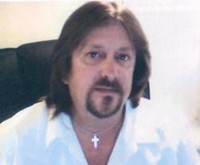 Russell Wayne Cooper was born in Terrell, Texas on June 12, 1962 to George Mack Cooper and Peggy Jean Cates. Russell passed away in a Dallas, Texas hospital on March 24, 2016.  Rusty was raised in Kaufman and graduated from Kaufman High School in 1980.  He lived all his life in Kaufman and for the last ten years worked for Compliance Technology in Milwaukee as an environmental technician.  Rusty traveled all over the United States with his work.  He was a member of the First Baptist Church of Kaufman.  He loved fishing and discussing politics.  Rusty is survived by his son:  Joseph Wayne Cooper of Kaufman, daughter:  Lindsey Jean Cooper of Kaufman, parents:  George and Peggy Cooper of Kaufman, brother:  Ron Cooper and his wife Wendy of Frisco, grandchildren:  Kaleb Cooper, Allie Cooper, Paisley Cooper and many other relatives and friends.  FAMILY HAS REQUESTED IN LIEU OF FLOWERS MEMORIALS BE MADE TO THE AMERICAN HEART ASSOCIATION.

To order memorial trees or send flowers to the family in memory of Russell W. Cooper, please visit our flower store.