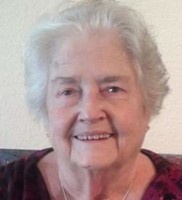 Virginia Ellis Dunn Blow was born on January 5, 1936 in Washington, DC and passed away peacefully in the home of her dreams in Windmill Farms, Forney, Texas on July 2, 2016 at 80 years of age. Anyone who met her would know she had a deep abiding love for her Lord Jesus, a loving heart, and a great sense of humor.

As a child Virginia had dreams of becoming a Ballerina until she broke her ankle when hit by a car.

Virginia remarried in July of 1977 to Paul L. Blow, Sr. After marrying Paul they worked hard and paid off their home , sold it and bought a motorhome for travelling.  Over seven years they have been to many states and have enjoyed meeting many people and keeping friendships along the way.  She has a closet full of pictures of their traveling adventures.

Known to many as simply “Ginger”, she created a side-business for her amateur photography and named it “Gingersnaps”.   She entered many amateur photo contests and won numerous awards.  She also was hired to photograph weddings and other events.

Over her lifetime, Ginger has raised toy Yorkshire Terriers and has had and enjoyed quite a few dachshunds as her “babies”. The two babies she left at home, Energizer and Hitchhiker, will be taken by her children.

Maryland Blue Crabs have always been a favorite. However, being too far from Maryland she has been known to settle for what crabs she could get in Texas or enjoy the Maryland Crabs shipped to her from her daughter, Mariann.  (Have to admit, Kroger did supply her well with shrimp and lobster.)

A plethora of cooking shows can be found recorded on DVD’s and her DVR, as she had great aspirations to cook new and different things… usually to the dismay of anyone shopping for her, as the ingredients were many times difficult to find.

Throughout her life she enjoyed sewing for family and was continually involved in the making of crafts, either for gifts or for sale at craft shows. She made cross ornaments for Christmas trees using pipe cleaners and plastic beads, which she gifted to friends ,family and others as her heart lead.  She made more than a few U.S. Flags out of safety pins and beads which were donated to the American Legion Auxiliary to sell for donations to aid in funding the Veteran’s hospital Christmas gift program.

She was loved my so many family and friends, and will be missed dearly.

To order memorial trees or send flowers to the family in memory of Virginia Ellis Blow, please visit our flower store.