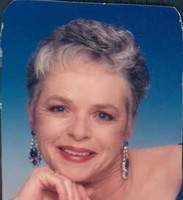 Bonnie Sue Boozer was born in Maywood, California to Kurt and Erna Lawson on August 19, 1943. Bonnie passed away on August 13, 2016 at her home in Kaufman, Texas. While born in California, Bonnie moved to Texas early on in her life. She was raised in Dallas and later moved to Seagoville and then later to Scurry in 1984. Bonnie also lived in Athens from 2001 until 2009, and then she moved to Kaufman. Bonnie loved her Texas Rangers and crocheting, and a great love for her dog Sally. Bonnie married James Windell Boozer on May 30, 1959 in Louisiana and he preceded her in death on November 24, 2000. Bonnie is survived by her son: Robert Oliver Boozer and his wife Sandy of Rosser, daughters: Becky Ashley and her husband Phil of Victoria, Donna Furgason and her husband Forrest of Combine and Kathy Acevedo and her husband Manuel of Kaufman, eleven grandchildren, five great grandchildren and may other relatives and friends.

To order memorial trees or send flowers to the family in memory of Bonnie Sue Boozer, please visit our flower store.