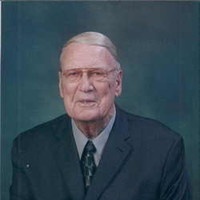 Walter Allen Martin was born on September 30, 1925 to Walter Burnett and Cora Lee Martin in Roxton, Texas. Walter “W.A.” Martin went home to his Lord and Savior on September 24, 2016 in Dallas, Texas. W.A. was 90 years old. He married Gwendolyn Chowning in Dallas, Texas on June 23, 1950. W.A. was born and raised in the community of Roxton, Texas. He joined the United States Navy and served during World War II. W.A. earned his Master’s Degree from East Texas State University. He then moved to Crandall and began a career as Principal and teaching classes and coaching. W.A. served the Lord and ministered for 63 years at the Church of Christ. In 1989, he retired from the education field. He preached and ministered until May of 2014. His main love was preaching and serving the Lord. W.A. Martin Elementary School in Crandall is named after him. W.A. influenced the lives of hundreds of people throughout his educational and ministerial careers. W.A. is survived by his loving wife of 66 years, Gwen, Son: Walter Lynn Martin and wife Sherry Ann of Cleburne, TX, Daughter: Lisa Ann Lehrmann and husband Mike of Cleburne, TX, Grandchildren: Sara Ann Hejl and husband Luke, Rachel Lynn Price and husband George, Brandon Lehrmann and wife Mary, Lindsey Adams and husband Tyler; Great-Grandchildren: Cooper, Juliet, Layla, Haley, Beau, Cora, Sylvie.

To order memorial trees or send flowers to the family in memory of Walter Allen Martin, please visit our flower store.