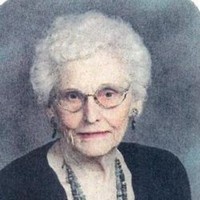 Iria Imogene “Gena” Baldwin of Kaufman was born Jan. 26, 1929 in Scurry, TX, the daughter of Alpha Homer Hatcher and Martha Elizabeth Hawkins Hatcher. She died Nov. 12, 2016 in Terrell, Tx.“Gena” married Hollis Copeland Baldwin of Kaufman on April 9, 1949, and together they made their long-time home in the Ola Community east of Kaufman. Along with caring for her family, she was employed by Kaufman Meat Packers and then served as the secretary to the school superintendent for Kaufman ISD until her retirement in 1980. She and her husband worked together representing Germania Farm Mutual Insurance of Brenham after they retired.“Gena” was well known for her contributions as a Bible Class teacher at both the Ola Church of Christ and The Kaufman Church of Christ. Following her retirement she traveled to several foreign countries on church missionary programs and also enjoyed traveling with the popular American National Bank senior citizens group that arranged many of the trips she enjoyed late in life.“Gena” was preceded in death by her parents; all eight siblings and their spouses; her husband, Hollis; and two grandchildren, Jessica and Daniel Baldwin.She is survived by her daughter, Deborah Jordan and her husband, Bill, of Kaufman; her son, Hollis Gene Baldwin and his wife, Lee Anna, of Kaufman; three grandsons, Andrew Jordan, Jeffrey Jordan and Josh Baldwin all of Kaufman and one granddaughter, Brittney Baldwin of Plano. In addition she is survived by four great-grandchildren, Hadley Jordan, Harper Jordan, Hunter Jordan and Heath Baldwin all of Kaufman.

To order memorial trees or send flowers to the family in memory of Iria Imogene Baldwin, please visit our flower store.