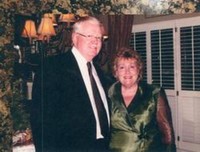 Glenda Rae Wheeler Rand, 68, of Kaufman, passed away peacefully in her sleep on January 3, 2016. A celebration of her life will be held Thursday, January 5, 2017 at 2PM at the First United Methodist Church of Kaufman.

Glenda was born May 17,1948 to the late Raymond & Edna Lee Wheeler of Kaufman. She graduated from Kaufman High School in 1966 and attended East Texas State University. Glenda spent her professional career as buyer and later owner of Daisy’s Dress Shop located on the historic Kaufman Square for 65 years. She was involved in numerous civic and business organizations and worked tirelessly to restore and preserve downtown Kaufman.

Glenda was preceded in death by her parents. She has left to cherish her memory, her husband of 49 years, James Morrow Rand, and their children Jayna & Steve Mitchell of Canton; Todd & Rheanne Archer of Kaufman and Allison & Ben Hawkins of Dallas. She is also survived by her grandchildren Colby Mitchell & fiancé Taryn Caldwell of Kaufman, Cade Mitchell of Canton and Kaylie, Stella & Grayson Archer of Kaufman; and two sisters and brother in laws; Sharon & Charles Chubb of Richmond, Virginia and Jane & Danny Heers of Garland. She will be remembered by a host of nieces, cousins, family, friends and customers for her zest for life, generosity, and laughter.

Due to Glenda’s passion for her community, in lieu of flowers, the family requests that memorials be made to Kaufman County Meals on Wheels, PO Box 836, Terrell, Texas 75160 or Helping Angels of Kaufman County, 1400 S. Washington St, Kaufman, Texas 75142.

To order memorial trees or send flowers to the family in memory of Glenda Rae Rand, please visit our flower store.