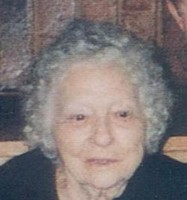 Edna Maurine Cox was born in Seagoville, Texas on November 26, 1921 to Burl Lonnon and Charlotte Almetia Hopson. Edna passed away in a Mabank nursing home on February 2, 2017.  Edna worked as a medication aide at a nursing home in Garland, Texas.  She was a member of the Church of Christ. She was preceded in death by a grandson Michael ray Tharp.  Edna is survived by her husband:  H. H. Cox of Canton, Texas, son:  Charles Ray Cox and his wife Linda of Kaufman, Texas, stepson:  Curtis Cox and his wife Darlene of Mesquite, daughter:  Norma Jean Tharp and her husband Michael of Kemp, Texas, stepdaughters:  Lettie Clark of Canton and Norma Oldham of Mesa, Arizona, grandchildren:  Michelle McKinney and her husband Luke, Ricky Dale Tharp, Wex Cox, and his wife Christy, Karen Andrus and her husband Stuart and many other great grandchildren.

To order memorial trees or send flowers to the family in memory of Edna Maurine Cox, please visit our flower store.