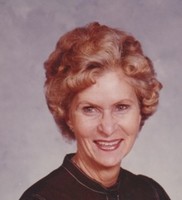 Lois Maureen Blanton was born in Crandall, Texas on June 12, 1920 to James and Ruth Toland Rushing.  Lois went to be with her Lord on February 14, 2017.  She was raised in the Warsaw Community where she lived all of her life.  Lois briefly taught school and later was an activity director for a senior citizen center in Balch Springs, Texas.  She attended the First Baptist Church in Crandall, Texas.  Lois married Oscar Blanton May 12, 1944.  Lois was preceded in death by a daughter Rita Ann Allen on September 3, 2014.  She is survived by her husband of seventy-two year’s Oscar Blanton, son-in-law:  Danny Allen of Kaufman, grandsons:  David Kent of Dallas and Todd Kent of Emory, great-grandchildren:  Major, Dash, Mary Elizabeth, Katie and Oscar and many other relatives and friends.

To order memorial trees or send flowers to the family in memory of Lois Blanton, please visit our flower store.