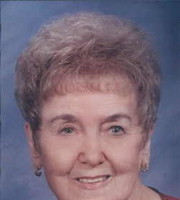 Lola Katherine Hatchel was born on February 21, 1923 near Noble in Lamar County, Texas to James C. Jordan and Pearlie Mae (Bryant) Jordan. Lola went home to her Lord and Savior on March 19, 2017 in Kaufman, Texas. She married Moss Adam Hatchel in Rockwall, Texas on November 11, 1946. In the late 1940's she worked for the RAF school and Chris' Cafe in Terrell, Texas and as a telephone operator in Kaufman and later worked for Brookshire’s Grocery up until her retirement.  She was a member of the First Baptist Church of Kaufman and the Ladies Auxiliary in the VFW. Lola was the first of eight children in her family.  She is survived by brother: Calvin Richard Jordan and wife Hazel of Forney, TX, Sisters: Bertha McCracken of Arvada, CO, Pat Knowles and husband Joe of Pantego, TX, Ann Meuir of Las Vegas, NV, Shirley Tallant and husband Bill of Edgewood, TX Caregivers: Margaret Barr, Ashley English, and Judy Cook. And many nieces and nephews. Lola was preceded in death by her husband Moss Adam Hatchel in 2005, son Ronnie Moss Hatchel in 1995, brother Robert E. Jordan in 2016, sister Irene Harrell in 2009.

To order memorial trees or send flowers to the family in memory of Lola Katherine Hatchel, please visit our flower store.