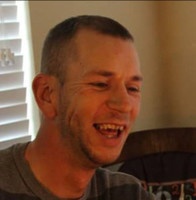 Jeremiah Daniel Stevens, 35, of Kaufman, TX passed away on April 22, 2017.  He was born to Homer Michael Stevens and Faith Elaine Shear on March 12, 1982 in Daytona Beach, FL.  Jeremiah was a devoted husband, father, brother and son-in-law.  He was first to lend a hand when his family, friends or strangers needed help, and was the last to leave making sure nothing else needed to be done. He excelled in his career as a HVAC Service Technician for over 10 years and took pride in his finished work.  He had recently started a new career as an HVAC Controls Technician and was well on his way to mastering this craft as well.  Jeremiah married Brianne Evans at Abner Baptist Church on July 21, 2012.  He became a son in the hearts of Brianne’s parents Kevin and Patty Evans.  Brianne and he had five children: Amber, Lyndsey, Daniel, Bryan and Josalyn; and they loved spending time together.  Those left to cherish his memory are his wife and children,  his sister Elisha “Summer” Harrison and husband Eric from Tool, TX and nephews:  Alpheus Smith III, Elijah Harrison, Mason Harrison, Samuel Rippy and numerous other family and friends who will miss him dearly.

To order memorial trees or send flowers to the family in memory of Jeremiah Daniel Stevens, please visit our flower store.