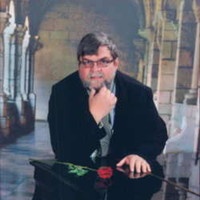 Stephen Wayne Andrews was born in Dallas, Texas on December 31, 1959 to Sterling and Dorothy Andrews.  Stephen went to his rightful place in Heaven on May 20, 2017 in Dallas, Texas.  He spent most of his life in Quinlan, Texas, graduating from Quinlan High School in 1978. Stephen married Robin Lenee Denney on December 1, 1978 in Quinlan, Texas. In 1996, Stephen moved to Crandall, Texas. He was a member of the Scurry Mount Olive Missionary Baptist Church where he served as a Deacon, a pianist and a Sunday school teacher. Since the age of 12 he played piano and the organ for Churches.  Stephen is survived by his loving wife Robin Lenee Andrews of Crandall, Texas, Son: Paul Andrews and his wife Jodie of San Antonio, Texas, Daughters: Tiffany Widener and her husband Richard of Crandall, Heather King of Balch Springs, Brother Phillip Andrews of Lake Jackson, Sister: Carol Smith of Quinlan, Grandchildren: Cody, Cain, Chloe, Bryson, Jake, Trevor, Trinity. Stephen will be greatly missed by all the loved and knew him.

To order memorial trees or send flowers to the family in memory of Stephen Wayne Andrews, please visit our flower store.