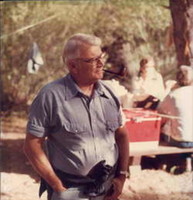 Joseph Wheeler Luckett, Jr., 93, of Kaufman, TX went to be with the Lord on June 6, 2017 at his home. Joseph was born on April 12, 1924 to Joseph Sr. and Eva Whitley Luckett in Breckenridge, TX. Joseph spent time hunting and fishing. He married Elizabeth Barton on October 3, 1958. He loved every moment he got to spend with his kids and grandkids. Joseph is a World War II veteran who spent 8 years in the Army. He was apart of the 104th Infantry known as the "Timberwolves". He earned a Silver Star, 2 Bronze Stars and a Purple Heart. After his time in the Army he went back to school and got his bachelor's degree at Texas Tech and became a Petroleum engineer until he retired. He was a member of Calvary Baptist Church of Kaufman and Victory Church of Scurry. Joe was preceded in death by his parents, wife and brother Robert Luckett. Those left to cherish his memory are his sons Michael Luckett of Pittsburgh, PA and Joseph W. Luckett III and wife Kumiko of Japan; daughters Deborah Brittenham of Diamond Bar, CA, Kathy Thompson and husband Greg of Anchorage, AK, Margaret Cochran and husband Van of Upland, CA and Amy Cox and husband Chris of Kaufman, TX; sister Mary "Wese" Hylton, 13 grandchildren, 14 great grandchildren and numerous extended family and friends who will miss him dearly.
To order memorial trees or send flowers to the family in memory of Joseph Wheeler Luckett Jr., please visit our flower store.