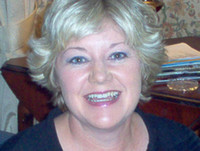 Carrie Lynn Stevens, 59, beloved Wife, Mother, and Grandmother, was called to her eternal resting place on July 6, 2017. She entered this world on May 29, 1958 in Kaufman, Texas, born to Eugene and Carol Ann Walther.

In 2011, she married Dan Stevens in Dallas, Texas. They resided in Kaufman, Texas.

Carrie was born and raised in Kaufman, Texas and resided there her entire life. She attended Kaufman High School and Stephen F. Austin State University, where she was a member of Delta Delta Delta sorority. Later in life, she received her Masters in Counseling from Dallas Baptist University. Through her career, she was a teacher, counselor, and an art teacher through her own company, Artworks Texas. She was also a minister at Skyline Mission of Faith Church in Dallas, Texas.

She was known for her many talents, creativity, and faith in God. Her passions were teaching young children how to bring out their artist within themselves; serving Christ through ministering with others; and her family, particularly her daughters and husband.

Her funeral and graveside service will be held on Saturday, July 8, 2017 at 10:00 am at Parker Ashworth Funeral Home in Kaufman, Texas. The family wishes to thank all those for their many prayers and support. Flowers can be sent to Parker Ashworth Funeral Home. All memorial donations can be sent in her name to Skyline Mission of Faith Church, 2044 Riverside Drive, Kaufman, Texas 75142.

To order memorial trees or send flowers to the family in memory of Carrie Lynn Stevens, please visit our flower store.