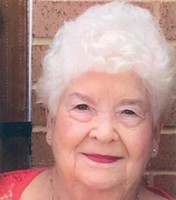 Betty Joyce Rodgers Bedrick, 83, was called to her eternal resting place September 6, 2017
with family by her side at her Kaufman home. She lost a 6-month battle with an aggressive
cancer. Betty was born on December 30, 1933 in Corsicana, to parents, Cecil and Gladys
Rodgers. She was the youngest of two siblings. Her family soon moved to Kaufman where Betty
grew up, attended school, was on the high school pep squad, and played some volleyball. One
of the most important dates in her life came on July 6, 1952, when Betty married Raymond
Edward Bedrick, the man she called the love of her life. They celebrated their 65th wedding
anniversary this past July. Raymond was in the U.S. Air Force, stationed at Bryan Air Force
Base, so the couple began their married life together in Bryan. A year later, they welcomed the
first of two children, Ray (Butch) Bedrick. Their second child, Barbara, arrived a few years later.
In 1956, the couple returned to the Lone Star community near Kaufman. Betty soon threw her
energies into raising Butch and Barbara, and later daughters Marjorie and Sherri.
Betty loved to cook and bake, and lovingly prepared family meals, birthday celebrations, served
as class home room mother many times,was a P.T.A. member, and sports fan attending Texas
Longhorn games, Texas Rangers, KHS football and baseball games, and Sacshe sporting
events.
Her children remember her as a loving, caring mother who supported them wholeheartedly from
education to church to athletics to cheerleading to college and grandchildren. Betty shared her
love of music with Raymond and her family, encouraged education with all her children, and
could play a mean Pictionary game. In earlier years, Betty traveled to Florida, Arkansas,
Missouri, Mexico and other areas. Later in life, she made trips to help with and see
grandchildren in Pecos, Tx, Wisconsin, St. Simon's Island,, Georgia, and visited her Ray (Butch)
in Tennessee and California,
Betty enjoyed staying up on current events, watching the 5:30 national network news almost
daily. She also had a passion for gardening canning, family, friends and especially her
grandchildren. Betty was a member of the First Baptist Church in Kaufman for 70 years, She will
be remembered for her forever love for Raymond and her family, her strength, and her
invaluable life lessons. We were blessed with the best wife and mother ever, and will miss her
every day.
Preceded in death by her son, Raymond Edward (Butch) Bedrick, (Jan. 26, 2003), brother, Roy
Rodgers, and parents, Gladys and Cecil Rodgers.
Betty is survived by her husband, Raymond, and daughters Barbara Bedrick, Marjorie Bedrick
Saenz and husband John of Sachse, Tx, Sherri Bedrick Martin, Kaufman, Tx., grandchildren,
Courtney Nicole Noble and husband Spencer, Ft. Worth, Andrew Saenz and Joshua Saenz,
Sachse, Lantz Martin and Cole Martin, Kaufman.
Her services were held at 2 p.m., September 11, 2017, at the First Baptist Church of Kaufman.
Interment was at the Kaufman Cemetary. Visitation was held Sunday, September 10, at Parker
Ashworth Funeral Home.
To order memorial trees or send flowers to the family in memory of Betty Joyce Bedrick, please visit our flower store.