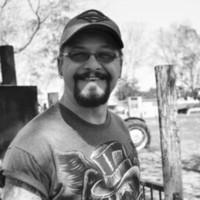 Daniel Eugene Boyd, 47, of Kaufman, TX passed away on October 3, 2017 at his home. He was born on December 12, 1969 in Terrell, TX to his mother Peggy Ruth DeLeon. Daniel lived in Kaufman and worked at O'Reilly's Auto Parts Distribution Center for 15 years. He loved his 80's hair metal music and his favorite band was KISS. He also enjoyed watching wrestling especially the Undertaker and Stone Cold Steve Austin. Daniel would spend time watching sports and his favorite teams were the Buffalo Bills, Buffalo Sabres, Chicago Cubs and Indiana Pacers. He also had an interest in any kind of reptile. Daniel married Joni Reil Boyd on October 23, 2010 at the Kleburg First Baptist Church in Dallas, TX and loved her very much. He was a beloved Husband, Son, Father and brother. His grandparents, Willie and Ola May Boyd, preceded him in death. Those left to cherish his memory are: his wife, his mother Peggy and her husband Jose DeLeon, Son Mark Boyd, brothers: Alonzo DeLeon and wife Michelle and Raymond DeLeon; Sister Elisa DeLeon Craig and husband Chris who will miss him dearly.
To order memorial trees or send flowers to the family in memory of Daniel Eugene Boyd, please visit our flower store.