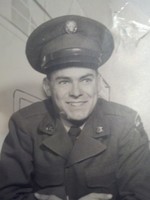 America and the Local Town of Kaufman Texas have lost one of its great ones.

In Loving Memory of

American and the local community of Kaufman, Texas have lost one of its great ones. On the afternoon of January 26th, 2018 passed away peacefully in his sleep with his wonderful Wife of 57 years Jaunell Reece right at his side where she always was.

Robert was born in Dallas to the Proud Parents Robert and Ethel Reece. When Robert was 18 years old, he courageously joined the Army in 1954 and served his country valiantly where he achieved the rank of Sergeant E5.  After the Army, he remained active in the National Guard where he achieved the Rank of Battalion Administrative Specialist and worked at the 380th Missile Nike Battalion. Bob also served in the National Security Agency in Alaska.

After Bob's honorable military service, Bob married his sweetheart and love of his life Jaunell Pierce on February 26th, 1960 and had two wonderful Daughters Pamela and Dianna.

Bob was a dedicated Christian Family man who was loved by all for his sense of humor, his friendships and the love of his family. Bob always wanted the best for his family and he was a cofounder of a very successful furniture business where he traveled the world and loved to play golf.

Bob loved taking his family on vacations which included many cruises. Bob was one of those people who fought  to survive various health issues and had such a wonderful desire to live.

Bob was a fixture in the Kaufman community since 1978 and all who knew Bob admired and loved him. He spent many days with his comrades at the American Legion reminiscing about his service time and sharing his fond memories of his military career. He was a generous man who loved to give and take care of those that were less fortunate than him. The American Legion Post was a second home to him and all of members of the Post will miss him dearly. Bob was also a proud member of the Knights of Columbus and Masonic Lodge. He will be missed by all of his fellow members.

Bob is survived by his loving wife of almost 58 years Jaunell, his two daughters Pamela and husband Lenny and Dianna, Grandchildren Ryan, Kyle, Justin, Andrew and Josh (who sadly has passed away) and his sister Ann (Rebecca).

To order memorial trees or send flowers to the family in memory of Robert Paul Reece, please visit our flower store.