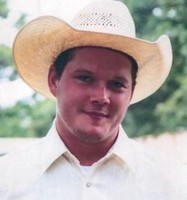 Kody Lyn Rough was born in Dallas, Texas on January 27, 1995 to Kevin and Kari Rough.

Kody was called to his eternal home with the Lord and joined his sister in Heaven on January 29, 2018. His life on this earth began to come to an end in Kaufman County and ultimately at Methodist Hospital of Dallas. Kody was raised in Kaufman, growing up on the football field from kindergarten through high school, and lead an athletic life throughout his youth. His passion for learning many branches in the agricultural industry carried him through years of experience in the hay business with his father, FFA and county shows, landscaping and horticultural management, farm and ranch work, fencing and welding. Welding set in with Kody as a teenager which would bless him with skills at an early age to create, repair and construct metal systems throughout his young life. Metal fabrication grew to a new level after moving to Lubbock Texas one year after graduation. Kody worked for Custom Iron Works constructing personalized ornamental iron systems for commercial, residential, educational, farm and ranch properties. He developed a meticulous eye for beautiful scrolled iron accents and learned concepts all the way to installations. While in West Texas, Kody learned pipeline systems while welding for Venable Construction which carried him to pipeline projects as far as New Mexico. During this time, he attended South Plains College and dedicated time to helping coordinate events in honor of his sister who was previously taken from the family by an intoxicated driver in 2012. After returning to Kaufman, Kody ambitiously extended his eagerness to work in his family’s community where he delivered John Deere equipment for Brazos Valley Equipment Company. In 2016, Kody would find his home base to begin a new career with Larrett Inc, Construction and Energy Services as a welder. He began with the installation team for underground utilities, development of road bores and constructing new fencing, gates and was currently working on a roping arena project. Kody loved to work and was always eager to spend seven days a week working on various projects. He continued helping his dad with round hay bale operations, including cutting, raking, baling, hauling and deliveries.

There was never a doubt where he stood on a subject and he was a warrior for those he loved or needed defending. His sense of humor was widespread and contagious. Always looking for the positive in others, he was an encourager, an includer, and had an overly compassionate, kind and giving heart. Young children were attracted to Kody and he never failed to play and entertain little ones with his childlike spirit. He would hold heart to heart supportive conversations with young teenagers who needed a supportive mentor to point them in the right direction. There were no limits to his willingness to drive across Texas to help one of them in need or get them back to their families. When he said, “If you call me, I will come”, he meant it and he followed through on his promises. Loyalty was incredibly important to him and his word was as solid as his large hands.

Kody loved the outdoors. From deer and elk hunting in the Texas brush or the Rocky Mountains, to varmint hunting after supper out behind the house, he loved to shoot. Kody loved to fish and spend time at the lake and found a new love in snowboarding. Spending as much time with his many friends was his favorite past time and laughter was always present. His randomness and joy was infectious, and would always be the last to leave a dancefloor. Kody loved to travel, learned to surf in Baja Mexico, and loved to fly fish or horseback across mountain terrains with his sister in Montana and trout fish by her side in Arkansas. He had many dreams of learning a thousand more things this life had to offer.

Being a child of God was evident in his dedication to those around him and loving attention to his family and loved ones. Kody was baptized at the age of 9 years old and he attended the Church of Christ with his family throughout his young life. Kody spent several years in the youth group of the First Baptist Church of Kaufman and would drive a John Deere tractor to youth events or school functions if need be.

Kody will be missed by hundreds.

He is survived by his parents Kevin and Kari Rough of Kaufman, grandparents: Carolyn and Tony Caldwell of Tyler, Don O’Donald of Sweetwater, Donna Knowles Rough of Kaufman, Paul and Dee Polish of Concord North Carolina and, great-grandmother: Leola Rough of Kaufman. His surviving aunts and uncles are John Rough, Tami and Scotty Mitchell, Tommy Jack and Sandra Knowles, Paul and Sharla Polish all of Kaufman, John and Nikki Dobbs of Kilgore; Ronnie and Vicki O’Donald of Wylie, Rodney and Rhonda Knowles of Red Oak; Many cousins other relatives and beloved friends.

To order memorial trees or send flowers to the family in memory of Kody Lyn Rough, please visit our flower store.