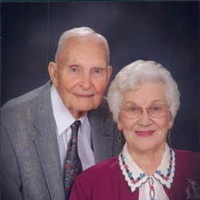 Louise Miklis Marek, 97, of Kaufman, TX passed away in Kemp on February 1, 2018.  Louise was born to John and Frances Miklis on January 6, 1921 in Kaufman.  She spent her time in the kitchen and on the sewing machine.  Louise was a member of St. Ann’s Catholic Church for her entire life.  She was also a member of the Catholic Family Fraternal of Texas and The Altar Society and she would sew christening gowns and other things for the church.  Loiuse married Albert Marek at St. Ann’s Church in Kaufman on October 3, 1939 where they were in love for 73 years till he preceded her to heaven in 2013.  Others who have preceded her include her parents, 5 brothers and 4 sisters. Those left to cherish her memory are children: Albert David Marek and wife Margie of Coppell, TX, Jerry Wayne Marek and wife Diana of Mesquite, TX and Carolyn Mikeal and husband O.D. of Kaufman, TX; Grandchildren: Oran Mikeal, Richard Mikeal, Lauren Ott, Peyton Marek, Marcy Boles and Melinda Marek; Great Grandchildren: Brandon Mikeal, Blake Mikeal, Matthew Mikeal and Boden Boles; sister Hattie deVlaming and numerous extended family and friends who will miss her dearly.

To order memorial trees or send flowers to the family in memory of Louise Miklis Marek, please visit our flower store.