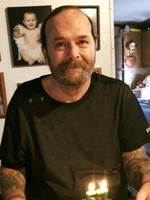 Dennis Keith Caffey, 57, of Terrell, TX passed away on March 1, 2018. Dennis was born to James F. and Anna Mae Caffey on February 1, 1961 in Dallas, TX. Dennis graduated from Mesquite ISD in 1979 and moved to Terrell in 1994. He married Theresa Thompson on January 24, 1997 in Kaufman, TX and they spent a wonderful 21 years together. Dennis enjoyed spending time riding on his motorcycle and loved the time he got to spend with his grandkids. He was a member of Victory Church in Scurry, TX. Dennis' parents preceded him in death. Those left to cherish his memory include: his wife Theresa of Terrell, sons: Jason Thompson and wife Nicole Velain of Wills Point and Bobby Thompson and wife Natalie of Terrell; daughters Misty Caffey and husband Michael Ashworth of Kaufman and Nichole Thompson and husband Shahien Ahmed of Terrell; grandchildren: Alex Thompson, Katie Thompson, Savannah Phillips,Devon Phillips, Haylin Thompson, Kara Thompson, Michael Ashworth, Gracie Ashworth, Kaci Thompson and Harper Thompson; brothers: James W. Caffey of Kaufman and Gary L. Caffey of Kaufman; sisters: Sandra Lawrence and husband William of Kaufman and Cheryl Cole of Kaufman; numerous nieces and nephews and a best friend Michael Moore as well as other friends who will miss him dearly.
To order memorial trees or send flowers to the family in memory of Dennis Keith Caffey, please visit our flower store.