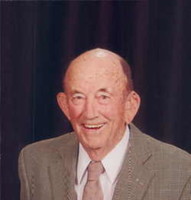 George Mack Cooper, 81, of Kaufman, TX went to be with the Lord on July 21, 2018 surrounded by his family. George was born on February 17, 1937 to Clyde and Grace Cooper at home in Kaufman County. George grew up and lived in Kaufman all his life. He grew up on the farm and became a Poultry farmer and feed store owner. George married Peggy Cates on September 15, 1956 at the First Baptist Church in Kaufman and spent a wonderful 61 years together. George spent time trout fishing, traveling in an RV club with his wife, playing 42, gardening and watching old western movies. He was fun loving guy who enjoyed his time with his grandkids very much. He was a member of Calvary Baptist Church and has been a Mason for 50 years. George was a beloved husband, father, brother, grandfather and great grandfather. Those who preceded him in death are his parents, son Russell Wayne Cooper, and siblings: Charles Wilson Cooper, Donald Wayne Cooper, Nita Sue Cooper and Rebecca Estes. Those left to cherish his memory include: his wife Peggy; son Ron Cooper and wife Wendy of Frisco, TX; grandchildren: Christina Benedict and husband Matthew of Midlothian, TX, Ryan Davis of Frisco, TX, Jeremy Cooper of Littleton, CO, Morgan Davis of Littleton, CO, Lindsey Cooper of Scurry, TX and Joseph Cooper of Scurry, TX; great grandchildren: Kandez Cooper, Blaze Reddoch, Kaden Cooper, Abbey Cooper, Chloe Benedict, Colin Davis, Liam Cooper, Claire Benedict, Keeley Davis, Caleb Cooper, Allie Rae Cooper, Caitlin Benedict, Paisley Cooper; sisters: Jenell McKinney and husband John of Kaufman, TX and Patti Godwin of Kaufman, TX; numerous extended family and friends who will miss him dearly. In lieu of flowers the family has asked that there be donations made in his honor to the Calvary Baptist Church building fund.
To order memorial trees or send flowers to the family in memory of George Mack Cooper, please visit our flower store.