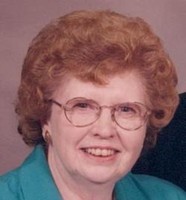 Noreen Cooper Loughan, 85, of Kaufman, TX, passed away on October 13, 2018 in Grand Prairie, TX. Noreen was born in Battle Creek, MI on May 17, 1933 to Frank and Carol Bell Copper. Noreen was married to James Loughan on August 16, 1953 in Charlotte, MI. She has been retired for the past 30 years but worked for Arco has an executive secretary before that. Noreen spent time in her younger years riding horseback, she also sewed and would make custom clothes. James and her would travel together in their RV all over the place. Noreen was a member of the First United Methodist Church of Kaufman. She is preceded in death by her parents and a brother James Cooper. Those left to cherish her memory are her sons: Patrick Loughan and wife Dora and Mike Loughan, and a grandson Dale Loughan who will miss her dearly.
To order memorial trees or send flowers to the family in memory of Noreen Cooper Loughan, please visit our flower store.