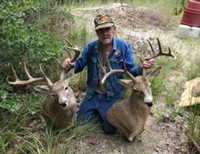 Jerry J. Stultz, 80, of Kaufman, Texas passed away on Saturday, October 27, 2018.  Jerry was born on August 31, 1938 in Oklahoma City, Oklahoma to Lucien Henry Stultz and Nellie Grayson Stultz.  Jerry had a way in life of always making others laugh with his sense of humor that he seemed to always have. He was also an avid outdoorsman who loved to hunt and fish.  Jerry also had a passion for Barbecuing for family and friends.  Jerry loved his family dearly and is survived by his Daughter Kay Green; Son Mark Stultz; Brother Fritz Stultz; Grandchildren Seth Green, Zachary Green and Ryan Stultz; Great Grandchildren Riley, Addison and Hank Green.

To order memorial trees or send flowers to the family in memory of Jerry J. Stultz, please visit our flower store.