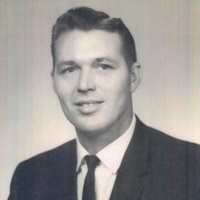 James T. Boss, 87, beloved Husband and Father, was called to his eternal resting place on January 18, 2019 in Kaufman, Texas. He entered this world on February 20, 1931 in Ben Franklin, Texas to Thomas and Minnie Lee Boss. He was a man that was full of life and very devoted to his family. He married Judy his wife of 54 years in Kaufman, Texas on March 1, 1965. They lived in many places while he was an executive for the Ford Motor Company. He spent time working in Missouri, Kentucky, New Jersey, Michigan, Minnesota, Ohio, California, Japan and even Bangkok before finding their way to Kaufman in 1986. James loved hunting and salmon fishing. Along with his many loves and talents James was also a private pilot. One of the last events in James' life was showing that love he had for his family by celebrating his eldest granddaughters birthday. He will be greatly missed by his family and loved ones. James is survived by his loving wife Judy of Kaufman, Texas, Son: James Glenn Boss and wife Stacy of Pompton Lakes, New Jersey, Daughter: Sherri Rachel and husband Bobby of Streetman, Texas, Sister: Eloise McWatters of Boerne, Texas, Grandchildren: Erica Noble, Lynsey Boss, Sydney Boss, Luke Rachel, Lara Boss, Chandler Noble, Erin Rachel, Great-Grandchild: Ezekiel Rachel.
To order memorial trees or send flowers to the family in memory of James T. Boss, please visit our flower store.